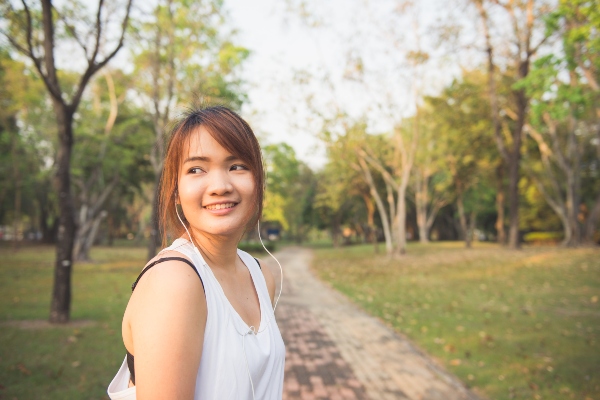 A runner/scholar pursues the causes of the “runner’s high”

“Life, liberty, and the pursuit of happiness” is not only a familiar phrase attributed to Thomas Jefferson, it also represents the core of what runners experience on a daily basis. Running totally engages your senses, liberates your mind and brings a smile to your face. Precisely why this happens is not totally understood. For one local runner, the subject is compelling enough to turn it into a career pursuit. Antonian High School and Trinity University graduate Jacqui Crissey will return to academia this fall at the University of Texas at Austin to study Exercise Physiology.

“The beneficial effect of running on mental health is of particular interest to me … my hope is to investigate and begin to describe the complex variety of physiological processes behind the psychological benefits of exercise. The idea that positive mental health is linked to the physical condition of the body is one that truly captivates me,” says Crissey.

So what causes this positive change in mood from running and other forms of exercise? Many researchers believe that endorphins are responsible. Endorphins are a group of opiate proteins with pain-relieving properties that a runner/ endurance athlete produces after a certain distance. But endorphins may be limited only to providing pain relief. There may be other chemicals involved that bring about the euphoric feelings associated with the “runner’s high.” This euphoria can be linked to feelings of pure happiness, elation, unity with nature, endless peacefulness and/or inner harmony. Often people claim to have atypical thought patterns, diminished awareness of one’s surroundings and an enlightened sense of identity. Interestingly, the emotional states associated with the “runner’s high” are often also made by those who describe drug or trance states.

Crissey recently came across a new study, conducted at the Georgia Institute of Technology and the University of California, Irvine, which caught her attention. This study by Arne Dietrich, an assistant professor of psychology, suggests that a class of chemicals known as cannabinoids may be the trigger of the “runner’s high.” Dietrich’s research team found very high levels of a naturally occurring cannabinoid called anandamide (anandamide produces effects similar to those of THC, the psychoactive component of marijuana) in runners and cyclists, who exercised at moderate levels for an extended period.

Crissey says, “The findings in Dietrich’s study have implications for some of the psychological effects that accompany exercise. This type of research, which explores the physiology associated with exercise-induced changes in mental status, is one which intrigues me, and is one that I would like to investigate further in Austin.” Crissey plans to pursue a master’s degree and subsequently a doctorate in Exercise Physiology at UT.

Chances are, none of this would have been likely if Crissey hadn’t been an athlete. Crissey competed in League Soccer, Cross Country and Track while at Antonion and played Intramural Soccer at Trinity. After graduating from Trinity in 2004, with a Bachelor of Science degree in Biology, she began working full time at a research institute. Still, she found that she was still quite strongly drawn to athletics, and she wanted to stay active and physically fit.

In 2005, a fellow Antonion graduate, Adam Stoobandt, who is a multisport athlete, encouraged Crissey to enter a triathlon. She completed her first triathlon, “The Rookie,” in 2005, and she competed in several more later that year, finishing in the top 10 of her 20-to-24 year-old age group for the South-Midwest Region. Building on this momentum, and for off-season training, Crissey joined Team in Training and set her sights on the Austin Freescale Marathon.

“The marathon is on every runner’s ‘To Do’ list. I joined Team in Training because it is for a good cause (as well as because of a personal connection; my grandfather suffers from cancer). I liked the idea of training in a team environment with professional coaching. I experienced everything you might expect during the training, such as miscellaneous aches and pains; however, in the end, I completed the training and I ran ‘sub-four hours’ (3:56) for my first marathon. I can be proud of that,” says Crissey.

Did Crissey experience a runner’s high during her training or during the grueling 26 miles of the Marathon? “At the 20-mile mark, I zoned out. It was so cold during the race, and everyone was just moving to stay warm. Whatever I managed to think about during the last six miles helped me to get to the finish line without seriously bonking,” she says.

When Crissey moves to Austin, she plans on keeping up with her exercise routine. After all, what better way is there to study the effects of running and endurance sports then by experiencing them firsthand? In life and in running, there will be highs and lows. Rest assured that, while in Austin, Crissey will attempt to remain as high as possible. After all, it is a part of her research.