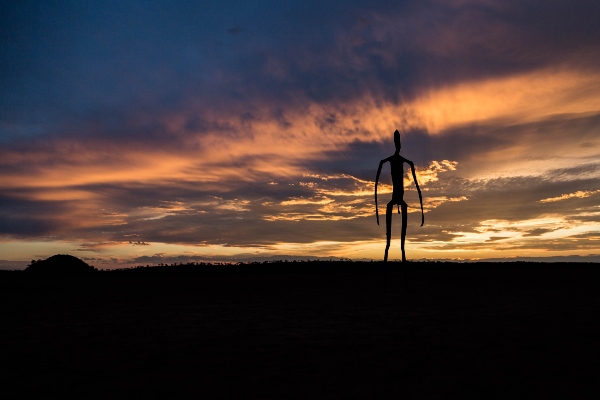 Quite possibly “our secret” may be getting out. When I walked into the Mind, Body & Soul gymnasium off Broadway in Alamo Heights, trainer James Olson looked at me and my friend, runner and massage therapist Dale Londos, and remarked, “Looks like you guys just got off the same spaceship!”

Initially Londos and I were taken aback by Olson’s comment, so we pretended to shrug it off; however, we secretly knew we’d have to report this potential compromise of our alien status back to our Starfleet superiors. Well, if our “our secret” is about to be revealed to the world, we might as well set the record straight.

Myth #1 Runners come from another planet.
That’s correct; we are not of this earth.
We’re from the Orion constellation, the galaxy of the hunter. According to Egyptian, Greek and Roman legends, this star cluster created life and is the source of energy in the universe. Myths reveal that Orion the hunter is in a perpetual chase across the sky, so runners feel similar in believing lateral foot movement should be never ending. We came here to show earthlings the forgotten value of activity and well-being, a true casualty of the present age of humankind. For the record, we come in peace and we mean no harm.

Myth #2: Runners are forever skinny.
This is an absolute fact.
Runners are born skinny, and whether we exercise or not, we stay skinny our entire lives. It doesn’t seem fair to the general public that runners can stay so naturally skinny. Runners have a special metabolism that burns calories quicker than you can say, “Anyone care for dessert?”

Myth #3: Runners belong to a secret society.
Indeed, runners do belong to a secret society.
Runners formed “associations” even before the days of the Knights Templar of the Da Vinci Code fame or the Freemasons. Runners meet at least one a month in mass public outings. We have rituals and initiations similar to the Moose Club’s charter. We elect club officers and have an annual picnic, along with a potato-sack race, water-balloon-throwing contests and a horseshoe tournament.

Myth #4: Runners run 20 miles every day.
Absolute fact.
We run six to seven days a week and average at least 150 miles a week. We are constantly training for a marathon, an ultra or a multiple-day race. We just can’t run enough miles in the day, and some of us run twice daily. We are so fanatical we run in all weather conditions and relish the harshest ones. We talk about our running with great enthusiasm, but only when asked; we don’t want to seem too boastful.

Myth #5: Runners have indestructible knees.
Most definitely.
Our knees are bullet-proof. Thanks to our galaxy’s advancements in bionics, we have perfect form, and our bodies never break down. We were a little worried about the television show The Six Million Dollar Man because it was way too close in appearance to our advanced medical technology.

Well, there you have it, the truth about runners. We understand we are different, but we do try to blend in with society and be good citizens. Our message is that there is a value to running that can only be described as”out of this world.”