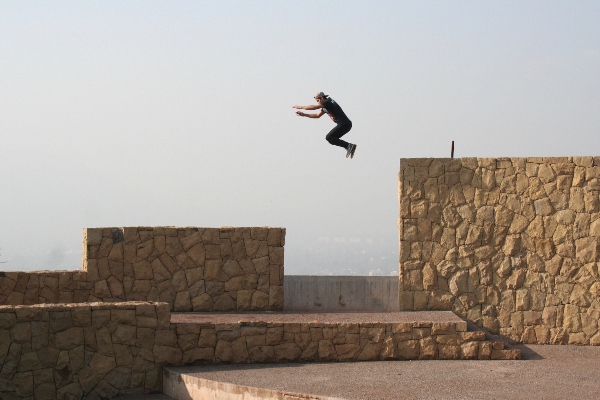 Eighteen-year-old Mike Avery is bouncing off the walls–literally! This McArthur High School senior leaps from a standing position to land softly on a skinny rail where he then walks with cat-like balance and precision before vaulting himself over a waist-high wall and executing a roll on the ground. No, he’s not auditioning for SpiderMan 4: He’s practicing Parkour, an extreme sport where the objective is to navigate and overcome physical obstacles in order to move from point A to point B as quickly and effectively as possible.

“It allows you to move freely when your surroundings confine you,” describes Avery, who spends anywhere from three to eight hours a day practicing his art. “It’s a physical philosophy.”

An extreme lifestyle
Avery, who looks like a California native with long blond hair and a lean, toned physique, says he has always been drawn to extreme sports. Over the years he has dabbled in everything from skateboarding to BMX bike racing. Most recently, he was a devotee of aggressive in-line skating similar to the style found in Xgame competitions. In fact, it was his love of in-line skating that led him to Parkour.

“All of the friends I skated with were moving away, and I was surfing the Web looking for a local skate group,” he explains. During his search he came across a U-Tube video titled “Evolution” that featured Parkour, and he was fascinated by what he saw. Further research turned up more videos and information, and soon Avery was teaching himself the moves at a local playground.

“I would watch the videos and then go out and try one of the moves,” he says with a grin. ” I’d mess up, go back and watch the video, and come back outside and try again. It took me a long time to get simple movements down.”

It wasn’t until a friend turned him on to the Web site www.texasparkour.com and its online message board that Avery discovered that he was not alone in his pursuit of the sport, and he began to train with other Parkour enthusiasts.

“Unlike other extreme sports, this is a very welcoming community,” says Avery. “They offer help with anything you need.”

The word Parkour actually comes from the French word parcours, which means obstacle course. The origin of the idea dates back to pre-World War I when French naval officer Georges Hébert traveled to Africa and was astounded by the way the indigenous tribes developed their bodies and skills using nothing but nature and natural skills.

Hébert developed a motto of “be strong to be useful;” and, upon returning to France, he began to teach what he referred to as his “méthode naturelle,” or the natural method. His method involved 10 basic exercises, such as running, jumping, walking, climbing and other natural movements, and through those he developed an obstacle course that became a part of military training.

Today Parkour continues to be popular in Europe and has just recently begun to gain notoriety in the United States after it was featured during a chase scene in the James Bond movie Casino Royale.
“It has always existed, but now it has a name,” laughs Avery.

The world is his training ground
One of the best things about Parkour is that you can do it anywhere. You don’t need a gym or fancy equipment — just motivation and a desire to push yourself to the next level. “You see your environment as an obstacle course,” explains Avery as he glances around the courtyard of the building where we sit. “This is a virtual playground,” he exclaims. “There are trees to climb and parking blocks for balancing. Everything can be used to further yourself physically and mentally.”

From a physical standpoint, Parkour conditions the body to work in a “fight or flight” mode. It is not about seeking a fight but rather avoiding one by reacting quickly and naturally in order to navigate an unfamiliar terrain and get yourself or someone else to safety.

Overcoming physical obstacles goes in hand with overcoming mental obstacles. “You work with navigating the physical in order to navigate the mental,” says Avery, who explains that Parkour has caused him to be more relaxed and to react differently in certain situations.

But regardless of the good it is doing for the body and mind, it is still a little odd to see a bunch of guys leaping around downtown San Antonio, and Avery admits that people are skeptical when they first see him and his friends practicing. “The public views us as a bunch of kids recklessly jumping around,” he laughs. “But when we speak to them about Parkour philosophically, they aren’t sure what to think.”

A safe start
As Parkour continues to grow in popularity, it is becoming easier for those who are interested to learn more about the sport. Avery is quick to point out that those new to Parkour should not follow his self-taught example.

“You will get hurt sometimes,” he says. “Try to find a gym and someone to train with when you begin.” A good place to start is www.texasparkour.com. The group welcomes everyone regardless of skill level and teaches participants the basic moves in a safe environment. “You have to start slow and go through lots of training on every technique to get it to work for you,” he says. “It’s hard for people to understand that they need to take it slowly.”

Avery adds that Parkour is not a competitive sport, and every person should take it at his or her own pace. The Parkour experience is different for every person, and that is part of what makes it so unique and what keeps Avery motivated. “It is deeper than you can express,” he says with more wisdom than you would expect from an 18-year-old. “You have to discover it for yourself. It is like a form of enlightenment.”