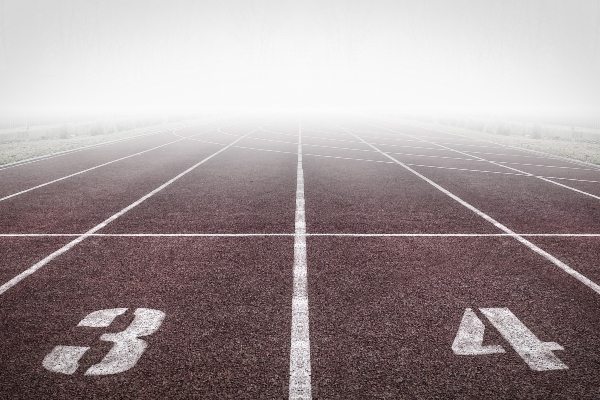 PRACTICING WHAT SHE TEACHES

Rita Lambert is a sixth-grade health teacher, an eighth-grade basketball, volleyball and track coach, an accomplished tri-athelete and an all-conference cross-country champion. Even more amazing is that this disciplined 23-year-old has accomplished all of this while suffering from exercise-induced asthma.

Lambert comes from a large family, all of whom excelled at volleyball. And although she gave the sport a try, Lambert realized early on that her true athletic gift was not to be found on the court but on the track.

“Even in elementary school during track and field days I knew I could run,” Lambert recalls.

Off and running
Lambert’s track and cross country skills at Garner Middle School impressed her coaches, who encouraged her to sign up for both sports at MacArthur High School. Although a strong athlete, Lambert found her talent was soon compromised by a breathing condition that allowed her to finish only 60 percent of the races in which she competed.

“I was diagnosed with exercise-induced asthma in high school,” explains Lambert. This was a devastating blow to someone like Lambert, who sees exercise as a major part of life, and she was sure her dreams of competing at the college level were over.

“Some coaches wouldn’t even consider recruiting me because of my condition,” she explains.

One coach, however, saw something special in Lambert and offered her a full scholarship in track and cross country to the University of Texas at San Antonio. The coach was world-class athlete Rose Monday, who, coincidentally, suffered from the same breathing condition as Lambert.

Monday sent Lambert to her own doctor, got her on the right medications, and helped her deal with the mental aspects of her disease. By the time she was a senior in college, Lambert’s attacks were reduced by half, and she went on to win two cross country meets and not once, but four times, the all-conference title.

“She knew what I was going through and feeling,” Lambert says of her coach. “She expected a lot out of me, and for her to believe in me was extremely motivating. She became one of my best friends.”

Competing taught Lambert an enormous amount of self-discipline and kept her from getting entangled in the typical college party atmosphere. Instead, she got up early, dutifully went to class and in May of 2007 added a degree in kinesiology with a teaching certificate to her growing list of accomplishments.

Trying something new
Following her graduation from UTSA, Lambert, who worked at Solar Tri-Sports in Helotes, purchased a bike and hit the road.

“I didn’t want to just run anymore,” she explains. “In college I was on such a strict schedule, and there wasn’t a lot of time or energy to expend on other sports.”

Through her job, Lambert assisted with several triathlons and thought, “I can do that.”

And she did! With no formal training plan in place, Lambert continued running and biking. She eventually began competing in triathlons on a regular basis. Although she has yet to win (swimming isn’t her strong suit), Lambert says she enjoys trying something new. “I like it, and I just happen to be good at it,” she laughs.

When she landed her teaching and coaching job at Bradley Middle School in the fall of 2007, Lambert treated herself to her first triathlon bike. “It was my reward for meeting my goal of getting the job,” she says with a big grin.

Hitting her stride
Meeting her goals is something Lambert does well, and she credits the support of good friends and a strong family for helping her succeed. She strives to offer that same encouragement and support to the students she teaches and coaches, and she tries to lead by example.

“I talk to them about what fitness has done for me and try to get them excited about my races,” she says. “I talk to them about peer pressure, body image and media messages,” she adds. “I try to make them understand that models in magazines do not look like the average person.”

Lambert doesn’t try to push her students into sports, but she does encourage them to find something they love and stick with it. And she focuses on fun rather than winning with her team kids.

“You have to have fun with it,” she explains. “If you don’t enjoy what you are doing, you won’t be able to take it to the next level.”

Between coaching and teaching, there isn’t much time left for Lambert to do all of the things that she enjoys. But even if she isn’t regularly competing, you can still find her putting on her running shoes and hitting the road almost every evening.

“It’s my stress-reliever in the same way that some people enjoy a bubble bath after a long day,” Lambert says of her dedication. “It’s my escape and my time to go and just be.”