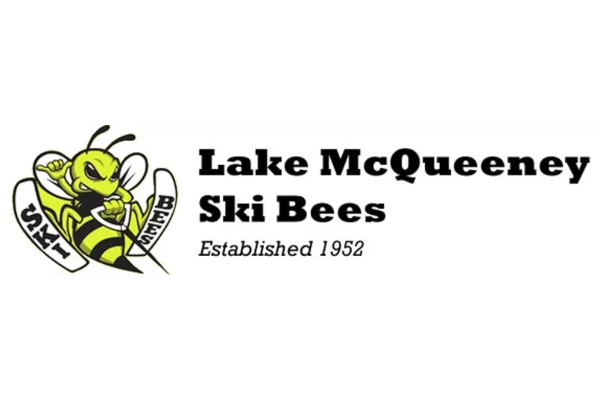 Lake McQueeney is a veritable beehive of activity this time of year as the popular Ski Bees water-ski club gears up for the summer season and their weekly trick-ski shows. Celebrating their 55th anniversary this summer, The Ski Bees are a group of water-skiers ranging from the very young to spry seniors. The Ski Bees perform every Thursday night, delighting large crowds with jumps, trick skiing, huge human pyramids and other awe-inspiring feats. Throughout the years, the Ski Bees have turned out regional and national water-ski champions, as well as three world champions. And today, after 56 years, The Ski Bees are still all the buzz – young skiers still growing and going strong.

Founded by the three “Bs,” Buzz Mueller, Betty Mueller and Bob Spalten, the Ski Bees originated as a club for children who wanted to ski in competitions — and they often won regional and other competitions, even as early as 1961.

While today’s Ski Bees now have a weekly show at a private lakeside club each summer, in the early years the ski show was a separate entity called The Buzz Mueller Ski Show. The show consisted of skiers performing tricks and jumps, and there were clown and ballerina acts. The ballerina act included a line of girls who skied in tutus and did impressive tricks as they passed in front of the cheering crowd watching from the banks. Even now, these many years later, these acts are still part of each show.

Over the years, the Buzz Mueller Ski Show and the club merged to simply become what is known today as The Ski Bees. There was a brief pause in the 1960s when the Bees temporarily disbanded, but their old buzz still hung in the air. So it wasn’t long before the club’s resurrection came around in the late 1970s at the hands of those who had grown up on the lake and loved to water-ski. Local lake lovers Dan Daniels and Mike Stautzenburger dug the old ski jump out of the dump and started a sign-up sheet for kids that were interested in joining the club.

The response was overwhelming, and in recent years the Ski Bees have had from 60 to 100 members. The group still turns out champion skiers (such as nationally ranked jumper Brian Harris), and many of the kids who learned to ski with “the Bees” spend summers working as ski pros at SeaWorld.

“The Ski Bees show-ski club is a great place for kids to learn to ski and to encourage them to help one another and work together. It’s a great team-building and character-building opportunity for the kids, and the adults and teenagers mentor the young ones,” says one Ski Bees parent.

Daniels agrees: “All the hard work and practice is good exercise and good discipline, too. Then all the work, exercise, fun and learning cumulate into an exciting weekly show. It’s a win-win situation for everyone, and it keeps the kids outside in the sun and unplugged from computers.”

Today’s Bees are a well-choreographed colony of “Bees” who perform with costumes and music, and they still perform the pyramids, flag lines and tricks such as “thread the needle” and “helicopters.”

Each week, the show begins with a line of the smallest skiers carrying flags that spell out “Ski Bees,” so even novice skiers and very young children have a part in the show. There is no age limit for skiing on either end — old or young. However, skiers have to officially join the group, pay dues, attend practices and ski clinics, and, of course, the Ski Bees carry good insurance, have a governing board and are USA Water Ski affiliates. There are fund-raisers, such as T-shirt sales, and there’s something for each member to do.

The tricks that the kids can do are nothing less than amazing, and the high level of professionalism the performers exhibit often awes first-time spectators.

There are ballerina lines in which young girls will slalom ski with no hands, holding on to the rope with their toes and swiveling around, skiing backward–all on the one ski. Others do “conventional doubles,” wherein a line of girls will take off from the dock on the shoulders of the boys. Then, as they ski past the crowds, they throw their arms and heads back down toward the water or stand on the boys knees and lean forward, balancing on the ropes with no hands. Some ski barefoot; others may ski with a kite that flings them high into the air. There are wake-boarders and knee-boarders. There are funny events where some may ski on a lawn chair or in a tuxedo. If there’s a way to ski differently, the Bees have tried it. Sometimes celebrity skiers like Banana George have made surprise guest performances. Each week brings something new. But perhaps the most popular event in the show is the ski jump.

“We are known for our jumping,” says Stautzenburger. “It’s like the bull riding of the ski world. You don’t have to be big or strong — you just have to have the right attitude.” Well-trained skiers with a lot of practice and safety training wear helmets and ski up a big ramp in the water. While they are in the air, it is perfectly timed so that another skier (also in a helmet) skis right below them, so the others are literally jumping over another skier. Watching it is a nail-biter, to be sure.

Stautzenburger assists with coaching the Killer Bees, a group of young people ages 14 and older who perform most of the flying or jump acts, complete with colorful suits, helmets and fireworks. “There is a lot of hot-dogging,” laughs Stautzenburger.

The biggest attraction, however, seems to be the end-of-summer “Old-Timers” show, where skiers 60 and older perform. This one-time-only event is usually held in August and has been known to draw more than 1,000 onlookers. Many consider it an annual memorial show honoring a beloved long-time Ski Bee, the late Sambo Muir, who was one of the early Ski Bees as well as a ski instructor and a mentor to kids on the lake.

The Ski Bees begin training in May, and jump clinics are held every Saturday morning. The best part is that anyone who can put on water skis can join — no matter how young or old they are.

“We want to give everyone who wants it the opportunity to ski,” says Stautzenburger. That’s the buzz!